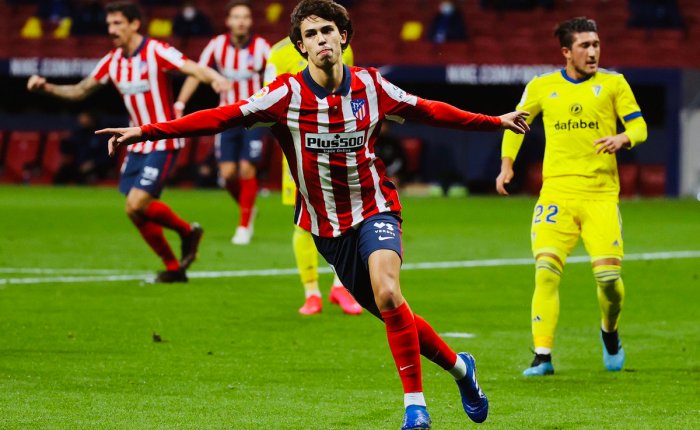 When Joao Felix showed the composure and skill to take the ball on his chest from Angel Correa’s hooked assist to beat past the onrushing Cadiz goalkeeper in the final moments of Atletico Madrid’s 4-0 win over their new La Liga opponents, it was not only his second of the game to seal an emphatic victory that briefly sent Atletico to the top of La Liga, it signalled something more profound.

It was the latest confirmation that their record signing is now coming of age, playing with the type of inhibition and electricity that is justifying their €120 million outlay for Felix from Benfica in the summer of 2019.

In his first season in Madrid, under Diego Simeone’s management – notorious for instilling defensive compactness and counter-pressing diligence high up the pitch – Felix was visibly burdened by being pigeonholed into a strict tactical system. Rather than allowing the 21-year-old the freedom to shine in the imposing way we are seeing now.

Nine goals and three assists across 2019/20 represented a respectable return for their investment in Felix’s first campaign, but the sky-high expectations and the stuttering influence on games indicated he was not reaching the levels he was projected to achieve, and his potential was being hampered by continual tactical tinkering.

In his first half a season at the Wanda Metropolitano Stadium, it was clear that Felix was being subject to repeated chopping and changing of his position, disrupting any hope of a smooth integration in Simeone’s setup.

Adapting to the Argentine’s coaching demands has proved challenging for creative offensive players like Thomas Lemar in recent seasons, with a rigid setup and requisite defensive responsibilities proving too alien for some.

However, with Felix, it was clear it was about catering to his needs for the benefit of the team as a collective unit.

By utilising Felix in the second-striker role behind the world-class driving force that is Luis Suarez – where he benefits from the creative freedom to drop deeper to act as a playmaker – he is playing as a traditional number 10 in the familiar role he operated during his Benfica days.

The relief of defensive responsibility means that he can use his positional nous to best effect around the opposition penalty area, playing a potent role in every final third action for Atletico.

Such a concession by Simeone is telling, not just for his reputation as a “system over individuals” management style, but it underlines the esteem Felix is held in, being their indispensable figure.

A footballer to build the team around in the hope that he can inspire them to challenge for honours in an increasingly unpredictable La Liga season.

To put that into context, previously, Simeone’s side had gone 48 games in all competitions without recording a victory by that margin.

All that dovetails when their stubborn defence shows no sign of yielding with Jan Oblak being reliable as ever in goal. Atletico have in fact only conceded two goals in their seven La Liga games.

The ongoing malaise at Barcelona and Real Madrid has no doubt opened the door to a sparkling outsider like Real Sociedad or Villarreal, but it is Simeone’s Atletico that arguably feel the most balanced and equipped for a title tilt, and it is being spearheaded by their Portuguese wonderkid.