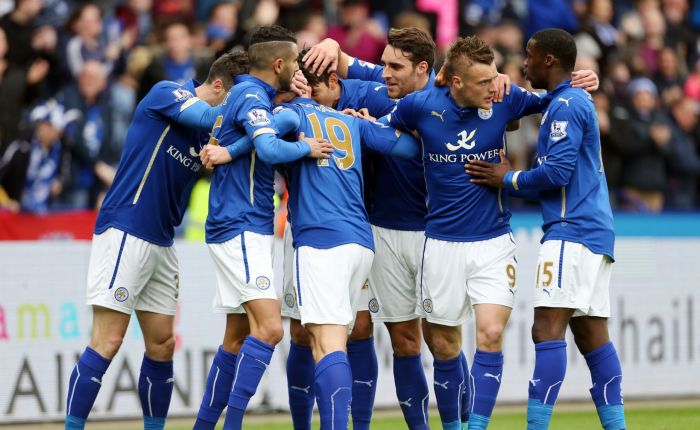 Only twelve months ago, Leicester City were rock bottom of the Premier League facing the prospect of having to re-build for a season in the Championship, barring a Great Escape.

That Great Escape happened. The City witnessed an incredible salvation job carried out under Nigel Pearson, winning 7 of their final 9 games.

Pearson left on the back of this incredible achievement- possibly with the thought that he had taken the club as far he could take them.

Much experienced manager Claudio “the Tinkerman” Ranieri was drafted in with the aim of improving on this finish and stabilising the club as a secure Premier League club. Tinkered he did, recruiting a careful selection of reasonable signings by using his knowledge of the foreign market. Robert Huth (£3m), Shinji Okazaki (£7m), N’Golo Kante (£5.6m) and the experienced Christian Fuchs (£3m) were signed.

Eight months on and a Jamie Vardy double at the Stadium of Light has mathematically sealed the Foxes Champions League football at the Kingpower Stadium next year, the first time in their Premier League history. Implausibly, Ranieri’s men also sit 10 points clear above second-place Tottenham, having only been beaten three times in the whole season.

For the first half of the season, Leicester were blowing away the majority of sides with devastating counter-attacking play. They were conceding plenty but simply out-scoring teams with the score line victory of 3-2 away at The Hawthorns on the 31st October a result that typified City’s style of play pre-Christmas.

Two players who played full part in last year’s survival bid in Jamie Vardy and Riyad Mahrez have 38 goals between them in this campaign and are both nominees for the PFA Shortlist for Player.

However, the team’s success and dominance have been down to more than just Mahrez and Vardy. Centre-backs Robert Huth and Wes Morgan have been defensive stalwarts, keeping clean sheets in nine of their last thirteen league fixtures.

Watford striker Troy Deeney has described Huth as “the toughest opponent he has faced this season”.

Leicester City defender Wes Morgan’s rise has been just as remarkable as that of the team he leads. Until the age of 30, Morgan had plied his entire career at Championship level with Nottingham Forest (2003-2012) and with Leicester City until the Foxes promotion in 2014. In his second season in the top-flight at the age of 32, Wes Morgan is on the brink of leading Leicester to a Premier League title; an achievement that will go down in history as one of; if not the most remarkable achievement in domestic British football history.

Full-backs Danny Simpson (a player with a troubled football past) and Christian Fuchs have been reliable, solid and have been commended for their defensive performances throughout the season, nullifying the most talented Premier League wingers this season.

Danny Drinkwater and N’Golo Kante have formed a formidable central midfield pairing that has enabled Leicester to control games so effectively. Drinkwater (26) has displayed such impressive form that Roy Hodgson has come calling, rewarding Drinkwater with his first England cap against the Netherlands in a 2-1 defeat at Wembley. N’Golo Kante has been in sensational form for the Foxes this season, proving to be one of the signings of the season and another real contender for the PFA Player of the Year award. His tireless running in midfield has been key to their league title surge, providing the basis for the likes of Vardy and Mahrez to flourish up front.

Ranieri’s men have the most balanced first x11 and boast team chemistry top clubs can only look in envy at. They have recruited so shrewdly and wisely. They are the model for those clubs in the lower echelons of the Premier League and newly promoted teams.

With four games remaining and sitting eight points clear of second-place, it is simply their title to throw away. No one will begrudge them this. The impossible can be achieved.

With six weeks left of the season, the Barclays Premier League remains wide open with every sector of the table still wide open with crucial outcomes to be decided; the title, top four, and the dreaded drop:

The story of the season.

The Foxes are seven points clear of 2nd place and will clinch the title if they win the next four league games. These fixtures will be Sunderland (a), West Ham (h), Swansea (h) and Man United (a). Ranieri’s men show no signs of wilting under pressure, playing breath-taking counter-attacking play throughout the campaign. Such an achievement will send shockwaves throughout the game.  The ultimate football fairy-tale is well and truly on.

After a rather predictable 5th place finish last season, Mauricio Pocchetino’s side have strung an incredible run of wins together from the start of the New Year making the North London outfit Leicester City’s most serious title challengers. Boasting the best goal difference tally in the league will almost serve as an extra point as they attempt to capitalise on any potential Leicester slip-up.

Inconsistency has cost the Gunners heavily this season. In a campaign, where the so-called “big-spenders” have largely struggled throughout, Arsene Wenger will be so disappointed his squad have been unable to capitalise on their expected title rivals’ poor form. The Gunners are 11 points off the top runners Leicester with a game in-hand. No doubt they will have to win every remaining fixture and hope Leicester slip up more than twice along the way.

Since announcing his impending summer departure, Manuel Pellegrini’s side’s form has tailed off poorly. Home form is of particular concern, having suffered more defeats this season at the Etihad than the last four seasons combined. Focus and priorities may well be shifting towards the Champions League as their title aspirations appear all but mathematically impossible. However, 3 points clear of 5th place, a healthy goal difference and an abundance of star quality in the squad makes them highly fancied to finish in the top four.

The Red Devils are currently sitting just one point behind their Blue Neighbours in 5th place. They have also been guilty of inconsistency, but have won three of the last four in the league. If Van Gaal is going to have any hope of keeping his job, United must build on recent successes and finish in at least fourth. A tough run of fixtures awaits including Tottenham (a), Leicester (h) and West Ham (a) but young Marcus Rashford’s exciting first-team breakthrough and Anthony Martial’s excellent form will make them strong challengers for a top four spot.

The Hammers are enjoying one of their finest campaigns in many years in the season they bid farewell to the notorious Boleyn Ground. They have pulled off a number of shock wins including away victories at The Emirates, Anfield & The Etihad and foreign imports Dimitri Payet and Manuel Lanzini have proved a revelation. Only trailing Man Utd by three points; however the fact that they are still in the F.A Cup as well as having one of the smaller squads may well impact negatively on their final league run-in.

Ronald Koeman’s men are seven points from Man City in 4th and at this point are rank outsiders to break through. However, on their day the Saints are a match for anyone and with Graziano Pelle and Charlie Austin on the mend, do not rule them out just yet.

Only a couple of weeks ago, Alex Neil’s Canaries were strong favourites from the drop appearing to lack any quality firepower or creative goal threat. However, two vital and hard-fought victories over West Brom and Newcatsle have propelled the Norfolk side four points clear of the relegation zone.   They are showing the necessary fighting qualities for survival and are hitting form at the right time.

For the 4th consecutive season, The Black Cats are deep in the relegation mire. Trailing Norwich by four points (with a game in  hand) and with a tough run-in with upcoming games against Leicester (h), Arsenal (h), Stoke (a) and Chelsea (h), the odds are against them. However, in Big Sam they possess one of the most experienced British managers who has been in this situation on more than one occasion and has never been relegated in his entire career. Jermaine Defoe is still one of the most lethal finishers in the League so do not rule them out just yet.

The Magpies have endured a largely torrid season up to now and sit 6 points behind Norwich with an inferior. Steve McClaren’s tenure at the club came to an end on the 11th March after he was sacked and the board have moved swiftly to bring in Rafa Benitez. The appointment appears to be popular on Tyneside and the fans feel more buoyant about survival prospects under the Spaniard. The team are not fancied to beat the drop as concede too many goals, and find scoring them very difficult. Benitez’s task is to make Newcastle more solid, but also increase their creativity and goal threat.